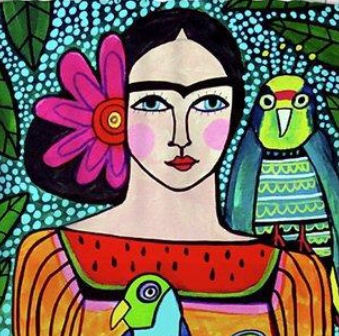 Oh I’ve got a lot of things on my list for ourlittlehouseinfrance this year.  With it only being a matter of weeks now before the long drive back to the French house, my mind inevitably has begun to turn to all the things that I’ve been collecting and storing up over the past few months that I plan to take with me on the next trip.  Of course before all that there is the rather large matter of whether or not I’ll be able to bring pooch Bella with me to France.  What with all this Brexshit nonsense.

So this is the latest from https://www.gov.uk/guidance/pet-travel-to-europe-after-brexit#return-to-the-uk

On this basis it looks like I will be OK to bring her.  This is a relief as it would be a long journey without her for company.

The next thing I need to do in preparation is paint a couple of bedside drawers that I purchased from a local charity shop.  They cost me £15 each and I thought that was a bargain and so snapped them up.  I’m going for an Annie Sloan neutral colour, probably “Old White”.  I’m going to strip the tops back to the natural wood and then stain them up to a warm oak colour to match the existing armoire and chest of drawers that we purchased from Maison du Monde last year.

I’m going to change the rather boring little pine knobs for these old look rustic shell drawer pulls (see below).  I purchased 2 as samples from eBay and just need to get a further 4.

I’ve also purchased a pair of beech kitchen chairs from another charity shop.  These will go well I think with the kitchen table I hope to eventually purchase from somewhere.  I’m also keen to have several styles of chair around the table.

The exact table I WANT is sitting upstairs in a Cafe Nero in Harrogate.  See below:

So when I’m up to it over the next few weeks, I will be stripping, sanding and painting.  Probably during February half term.  But there are other things I would like to try this year involving the garden and in particular the fruit trees.  I have about 12 fig trees in the garden now, along with 6 plum trees and a pomegranate.  There is one very special local fig tree on our boundary which I have tried in vain to propagate since we bought the house in 2012.  So this year I want to try air layering which according to all the research suggests is relatively straight forward.  What air layering does is effectively create another plant.  It’s a natural process and happens when a branch/stem touches the ground and then takes root.  In order to do it artificially I will need to find a good strong healthy stem and then cut away the bark all the way around to about 2 inches.  Rooting hormone can be applied and then this bare patch is covered with damp compost in a plastic bag or container and taped closed.  It remains covered in the plastic until new roots can be clearly seen.  At which point it can be cut from the parent plant and potted.  I’m really looking forward to having a go at this.  Will probably have a go with a very mature apple tree that we have hear in the UK too.

And then the final thing that’s on my mind is the purchase of a new shower curtain, hence the vibrant image of Freda Kahlo at the start of this blog post.  I saw this yesterday while mooching through my Instagram and then the search to find one began.  I did find one but it was really too expensive so a new shower curtain is on hold for the moment.

I will update with pictures of the bedside drawers once they are painted and have their new knobs.

The funny thing about having ourlittlehouseinfrance, our home away from home, is that the minute I know it’s only 9 weeks until I’ll be back, then I begin to plan for all the small and large jobs that need to be done.  That’s while I’m sitting here on the sofa ignoring the fact that I have half a wall in the lounge still to paint and yet I’m thinking we need new gate posts and gates in France.  Oh yes, and all the new shutters we had fitted last year still need to be painted.  Good job I’ve got my feet up on the sofa at the moment or I’d need to sit down.  Ha, ha!!!

Ok, well we actually arrived on Saturday matin and the weather was gorgeous, up until an awful thunderstorm that put the electricity off for 4 hours. Then Sunday morning was cloudy but sunny and warm as I headed off to a vide in Marmande. Missed B as she couldn’t find it and has no mobile, so no way of contacting her. 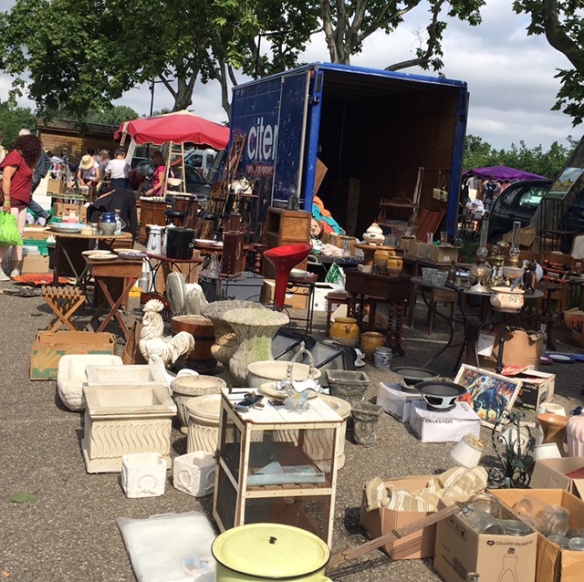 Monday between 8 and 10am we had to wait for the delivery of an armoire from Maison du Monde. Duly arrived about 9.30am and after they refused to take their shoes off to go upstairs, we accepted it being left downstairs. At least they took all the packaging away. Hubby and I then got it upstairs, but only just and taking a small chunk of the landing wall with us. Love it though, it’s just what we needed. Clothes now have a home.

Then late Monday morning, met B & L in Duras for tea and coffee at the Duchesses which is community café that opened in October last year, so very pleased to see that it’s still going strong. In the evening had B, L, M & T over for aperitifs, nibbling and chatting till late.  Lots of laughs and discussions re Brexit.

So weather wise, this is what we’re faced with. Drizzle, drizzle and more drizzle all week until Saturday which is when we travel back. Lovely. Anyway today the boys are heading to Bordeaux and I’m staying put I think as L will be heading up from Duras to stay with us. L has offered to Bella sit while I go to Bordeaux too but I think I’ll stay and do some painting of shutters.

Garden is doing well apart from the 3 Oleanders I bought from Jardin de Beauchamp which have died. Nothing more to report from Petit Coquelicot – over and out, or rather over and in, as it’s drizzling.

The decision not to enact Article 50 means that the UK’s Brexit could take up to two years.
But who knows???
The only short answer is, we don’t know.  Now that Britain has voted to leave the EU, we will just have to wait and see what the future negotiations bring.  The worst thing will undoubtedly be the uncertainty.  There will probably be a fall in house prices and therefore the value of our French home.  So what, as we do not intend to sell it any time soon and were always in it for the long hall. 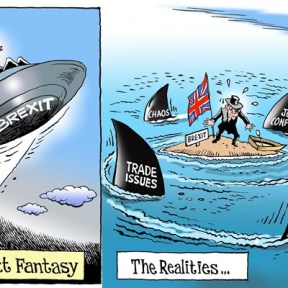 Triggering Article 50, formally notifying the intension to withdraw, starts a two-year clock running. After that, the Treaties that govern membership no longer apply to Britain.  The terms of exit will be negotiated between Britain’s 27 counterparts, and each will have a veto over the conditions.
According to http://www.thelocal; “Tony Emery, who sells French homes, said if the exchange rate drops further then it could mean real problems for home buyers”
At the moment it’s £1 = 1.23 Euros.  This is better than when we bought our house in 2012.
The crucial thing is will this be sustainable in the longer term.  The concern will be if the rate moves closer to parity. 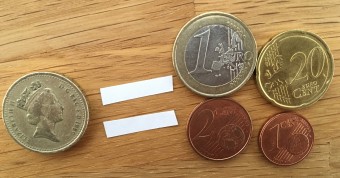 But there will be many people who had plans to move to France and realise their dreams. They may want to speed these plans along within the 2 year time frame and this could have a positive affect on property prices in the short term.  I would imagine that people who are hoping to move to France will be in shock this weekend.  They, like me, probably thought that we would pull back from the brink of a Brexit vote at the last moment and vote to remain.
The more far reaching concern is when Britain finally unpicks itself from the EU then the right to live, work and own property in any EU country will no longer be there.  What will the arrangements be then?  Will it be harder to make the move to France?  Perhaps not, in view of the number of French people who live in Britain and the number of British people who live in France, an agreement between the two countries is likely to be reached. However, according to http://www.completefrance.com it is possible that British expats will have to apply for visas or the carte de séjour, in order to live and work in France.  They also go on to say that Britain’s decision to leave the EU should have little effect on the tax a British expat in France has to pay. The double tax treaty agreed between Britain and France will be unaffected by Brexit and if Britain decides to remain part of the (European Economic Area) EEA then tax treatment wouldn’t change because the same rules apply to EEA residents as EU residents.  The EEA includes EU countries and also Iceland, Liechtenstein and Norway. It allows them to be part of the EU’s single market.

Switzerland is neither an EU nor EEA member but is part of the single market – this means Swiss nationals have the same rights to live and work in the UK as other EEA nationals.

One of the major areas of concern according to www.completefrance.com is for retired British expats in France is whether the NHS will continue to pay for their healthcare via the S1 form. Expats who work in France and pay social charges are entitled to the same state healthcare as French residents however, retired British expats have their healthcare paid for by the NHS. It is uncertain whether this will change if Britain leaves the EU.

Those who visit France but are not resident are currently entitled to access the French healthcare system for free using the EHIC (European Health Insurance Card) and there are some concerns this would no longer be the case in the event of a Brexit.  However Britain as an EEA member Britain would be likely to remain part of the EHIC scheme.  There is a precedent for this – Iceland, Lichenstein and Norway all have the option of belonging to the EHIC scheme, even though they aren’t part of the EU.

If you have lived in France for five years then you can apply for French residency and this would give you access to all the same rights and benefits as French citizens.

Find out how to become a French citizen

On March 25, 2017, European leaders will mark the sixtieth anniversary of the signing of the Treaty of Rome, the EU’s founding document.  I do hope that we don’t live to regret not joining in the celebrations.

In the meantime keep calm and try not to panic.

Thanks to http://www.completefrance.com for the links.

Owners of a little French house.

Check out my previous blogs

Welcome to The–Thrift for hints, tips, news and reviews from the world of ethical shopping

Where what you want whatever your age

My Other House is in France
move forward

and so the journey of a new life begins...

Self sufficency, wild gardening, and finding happiness in France. Follow my adventures with a menagerie of feathered friends, designing fabrics at Thistle Cottage, renovating farm buildings and using chalk paint!

Unemployed with a cabbage: tales of family life in France

France Has Mud Too

The Beck of Beyond

Lucy and Rich in the land of cheese...

sonofabeach96
Mountain Figs
Under The Banyan

Stories about us and nature

Consult the genius of the place